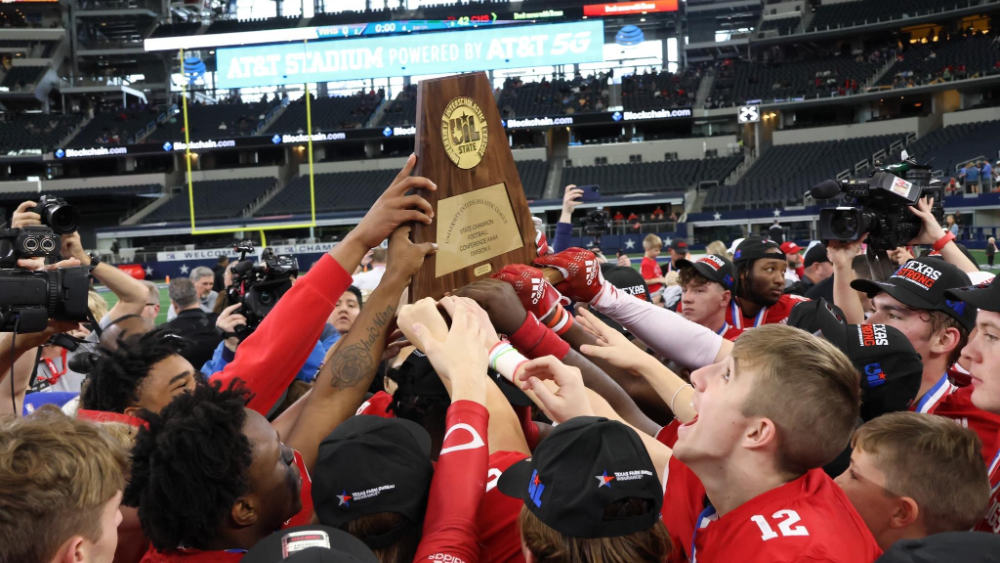 ARLINGTON — The Carthage Bulldogs football team isn’t about their preseason ranking, it’s about how they finish the season.

The Bulldogs — who were the preseason No. 1 ranked team in 4A Division II — not only proved that they were indeed top dogs all season, they emphatically closed out the season that way also.

The Bulldogs posted their fifth shutout of the season — all of them by scoring 41 or more points — as Carthage dominated previously undefeated Wimberley 42-0 for the program’s ninth state title — all of them coming under Coach Scott Surratt — on Friday at AT&T Stadium in Arlington.

“It was a dominating performance obviously,” Surratt said. “From the word go, we fumbled it (the first drive), but other than that we felt like we had some advantages in the passing game and had a lot of advantages defensively.

“We took advantage of all those advantages and played well.”

Senior quarterback Connor Cuff — who was named 4A D-II State Championship Game Offensive Most Valuable Player — threw for 299 yards and four touchdowns while completing 14 of his 22 passes and added a one-yard rushing touchdown in the game.

In what was likely his final time putting on a helmet and shoulder pads, the University of Louisiana-Lafayette baseball commit put on yet another exceptional performance.

“It was a real special game,” Cuff said. “I think we came out and both played pretty good and wrapped it all up. It’s just special times.”

Carthage (16-0), who had to surprisingly come from behind for a 42-35 victory last week at the Star against Glen Rose, took off after turning the ball over on downs their first offensive possession against Wimberley.

After returning the favor and forcing a Wimberley fumble, Cuff connected with wide receiver Noah Paddie for a 50-yard touchdown pass on 4-and-4, and the ‘Dawgs let loose.

Wimberley (15-1) was forced to punt on their next offensive possession, and Cuff and Paddie burned them with an 82-yard hook on the next play.

Cuff would score on a one-yard quarterback keeper on the final play of the first quarter to make it 21-0 in favor of Carthage.

Paddie tied the state game record with yards receiving as the senior finished with 191 yards on eight catches, including the two touchdowns. Paddie tied Carthage alum Mekhi Colbert, who did it against Kennedale.

“It was a really special game,” Paddie. “That’s the way we wanted to end it.”

KD Matlock had a 12-yard touchdown reception, and Viencint Cabada had a two-yard receiving touchdown for the Bulldogs.

Matlock led Carthage with 82 yards on 10 carries, LaRandion Dowden had a two-yard rushing touchdown, and Jakerrian Roquemore had two catches for 67 yards.

“The big difference was the speed difference,” Cuff said. “They came down into press, and we got guys that can out run them. I just have to throw them a good ball.”

Carthage was once again without No. 1 receiver Montrel Hatten, who missed the game with a sprained ankle, and it was next man up on the receiving core.

“A man goes down and we have a lot of people that can step up,” Cuff said. “These past two weeks, (Roquemore) has really stepped up in the passing game.”

Roquemore was stellar on both sides of the ball as the senior was named 4A D-II State Championship Game Defensive MVP. Roquemore finished with an interception, a forced fumble and two tackles.

“Our goal was to get to state and win it,” Roquemore said. “We had to work hard for it every day, and on defense everybody put in the work together. We got here and won it.”

K.D. Bell also had an interception with a sack, and Deiontae Marry led the Bulldogs with eight tackles.

Carthage led Wimberley 35-0 at the half.

The Bulldogs held Wimberley to 96 yards of total offense in the first half.

“Once we got that 21 skunk, we knew we had it in the bag,” Roquemore said of the teams’ hot start. “We couldn’t let up after that.”

Cuff threw for 239 yards and four touchdowns while also rushing for another in the first half.

The Bulldogs gave the Texans’ offense fits the entire game as they were held to 239 yards of total offense.

Wimberley sophomore quarterback Cody Soever was held to 127 yards passing on 10-of-25 passing, including a pair of interceptions.

Bell intercepted Stoever in the end zone on the opening drive of the second half that took nearly eight minutes off the clock.

This was the first shutout in a 4A state championship game in 19 years.

On the season, Carthage trailed for 4 minutes, 2 seconds in all 16 games combined. The Bulldogs’ lone deficit came in the fourth quarter against Glen Rose, when Carthage trailed 35-28 with 6:34 remaining before tying the game at the 2:32 mark.

Surratt improved to 9-0 in state title games, including a perfect 6-0 mark at Jerry World.

The legendary coach was asked postgame if he thinks of the magnitude of tying Gordon Wood and Jerry Burkhart for the most UIL state championships.

“No, not really,” Surratt said. “I got asked that on the field and not really. When you’re in the moment and the grind — we play longer than anyone but the NFL. You don’t think about those kinds of things. We’ll think about it maybe tonight or tomorrow or the end of the career.”