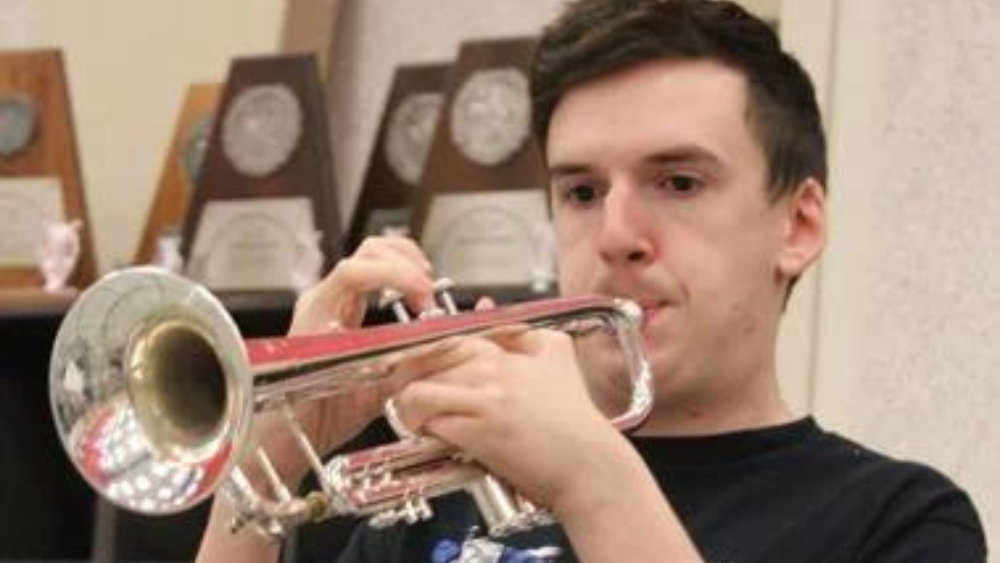 Persistence, practice, goal setting and overcoming both mental and physical obstacles are among the attributes which have propelled Carthage High School senior Kaleb Hathaway to earn a place on the 2023 Association of Texas Small School Bands All-State Band.

It is not the first time he has advanced to state. He earned that honor his sophomore year but had a very off year when he was a junior, Hathaway said.

Being hospitalized for kidney-related issues, losing momentum due to COVID and having mental setbacks all contributed to his junior year being pretty much a lost year as far as his musical aspirations went. Add to that the fact Hathaway had no natural musical talent and the odds were stacked against him.

Other than family members, perhaps no one is more aware familiar with how far Hathaway has come than his band director, Nicholas Durham.

“He always wanted to be really good, he wanted it, he just didn’t sound it at all,” Durham said. “He was just not good at all.”

But Hathaway’s desire to become a good musician overcame that lack of raw talent, he said.

“I was thinking how do you get a kid who is so into it, and wants it so bad, but they’re so far off the mark it was like God’s playing a cruel joke on us here because it was just not fair,” Durham said.

“Let me tell you, he just worked, worked and worked,” he said. “I did not think he could get to where he’s gotten, that’s just how far behind he was when he started.

“It’s been inspiring,” Durham said. “He just works so hard and gives it maximum effort, sometimes to his detriment.”

He said Hathaway’s reach for perfection sometimes stands in his way.

“What messes him up more than anything else is that he tries too hard. You ask him to try one little thing, but he sometimes takes it too far,” Durham said.

“But this year he has a really good balance, he rolls with the punches and has really matured, and that’s the cherry on top for him,” Durham said. It is obvious the band director is proud of how far his student has come.

Hathaway said he agreed with his band director.

“I do occasionally look back and see that I’ve come a long way,” he said. “I had to scratch and claw to get where I’m at. Some people are just naturally gifted. I was not.”

Among the setbacks Hathaway faced in his high school years was a kidney issue, which resulted in being hospitalized in Longview before being transferred to Dallas for treatment.

“That was one of those times it felt very serious and emotional,” Hathaway said. If the condition had not been caught as soon as it was it could have led to kidney failure.

His junior year was traumatic for the student. He said he was recovering from a hard break-up with a former girlfriend and had other emotional issues which resulted in having much of his normal life, including band, sidetracked for months.

In both summer breaks between his freshman and sophomore year and sophomore and junior year, he was denied the highly anticipated opportunity to attend band camp. First, due to COVID resulting in cancelation, and then to his own health issues.

With his junior year issues, he missed practice time and lost much of the momentum he had in his sophomore year when he first advanced to the ATSSB All-State Band.

Trumpet, Not His Choice

In the sixth grade when Hathaway entered band, he had his heart sat more on playing percussion or baritone. Instead, after tryouts on a mouth piece, he was assigned the trumpet. It was chosen for him rather than him selecting it. Hathaway was uninspired.

“I was in a bad spot compared to my fifth grade year,” he said.

“I didn’t really practice that much because I didn’t think I was going anywhere with it and I had some ups and downs,” he said. Despite that, he plugged along and had some high notes in an otherwise humdrum year and he managed to overcome his down time.

“It’s about how you get back up which matters,” he said.

He continued to participate and practice in band in his seventh and eighth grade, but basically had lackluster years with some glimpses of encouragement.

“While I didn’t have the results I wanted, I definitely progressed,” he said. Hathaway made second chair and then first chair as his skills with the junior high band progressed.

When he entered high school as a freshman band member, he experienced downs, but also some high notes.

“It’s been quite a journey. I remember in my freshman year I was just clumsy and didn’t know what to do,” Hathaway said of the new environment.

In spite of that, he made the all-region band his freshman year and continued to stick with his trumpet. He was selected outstanding freshman and received a couple of gold medals.

“Oh, I said, I like this,” Hathaway said of the encouragement. “I remember coming back my sophomore and I was ready and determined that I was going to make it and do great things.”

While he had high expectations, when it came time to try out for a coveted chair as a trumpet player on the state band, he came up one chair short. He ended placing fifth chair in area competition, which was one chair away from being able to advance to state.

“I was not OK with that,” Hathaway said. But an unusual turn of events saw one of the top four trumpet players lose their spot due to a technicality. That opened the door for him to advance to state.

“I felt bad for that person, but I had the opportunity and I knew I couldn’t waste it,” he said. He was pumped and excited.

“I felt I was truly in my prime and felt I could get better, better and better,” he said.

“What really sparked the motivation to make all-state in my sophomore year was that I played solo and ensemble contests,” Hathaway said. “I did really well and I got to go to state.”

He got to advance to state with his solo performance. There he remembers a judge asking him if he had made all-state before. That acknowledgement from an outsider’s point of view to the talent he was displaying was encouraging.

“It was then I knew that I had the potential,” he said. “I just kept working and working.”

The future looked bright for the Bulldog trumpeter as he prepared for his junior year at the beginning of the 2021-2022 year.

While he had not previously been able to go to band camp, due to COVID and his own kidney issues, he was looking forward to that opportunity for his summer prior to his junior year.

That did not happen and he did not advance to state that year.

“I thought I was going to but I didn’t,” Hathaway said.

Hathaway said he faced steep mental challenges as he entered his junior year which resulted in major setbacks for his musical journey.

“I wasn’t really as focused as I wanted to be,” he said. The CHS band as a whole had an off year, he said.

“We usually make all one’s at contest, but that that year we made a 1-1-2, which is good but it’s not the straight one’s we usually get,” Hathaway said.

“I was recovering from a break-up. That year just didn’t feel right,” he said. “Everything started to get better by the second semester of my junior year.”

He made state solo ensemble again and he finally got to go on an ensemble trip.

“That was truly a blessing. The memories and friends I made there, it was just such an incredible time and I really enjoyed it,” he said. It provided the time to connect with his band friends.

“I get to see them every day, but I don’t get to hang out with them outside of school because I’m either practicing my trumpet, playing video games or building LEGOS,” he said of his pastimes.

“Although band can be challenging, it can also be fun and you can make memories,” Hathaway said. “That’s what I love about band, the memories you make and the progress you make.”

“It started with a bang,” he said. “I tried out for region and got second symphonic and advanced to area. I was a little bit disappointed at first.”

With the help of his mother, Karla Hathaway, he received a lot of positive reinforcement. She was who helped him see the positive in his achievements, even though they may not have been as much as he wanted.

“My mom really encouraged me to think positively and that is something that has definitely helped me,” Hathaway said. “I focused on that and told myself it’s not over and that there’s still a job to do.”

He went on to make it to area competition and made first chair for the CHS varsity band. On the weekend of Jan. 7-8, Hathaway realized his dream could be reached again.

“Then this past weekend I made the All-State Band again,” he said. Hathaway knew he had the potential.

“I knew I had a good shot. I was thinking ‘what do I have to lose?’” he said. “Having that nomination to be selected with all of these truly great musicians is truly a blessing.”

Unlike his sophomore year when COVID resulted in the cancellation of a trip to San Antonio and the experience of actually playing with the other 285 ATSSB All-State Band, Hathaway is looking forward to that trip on Feb. 8-11.

He will be rehearsing with the other all-state nominees before performing on Saturday, Feb. 11, in the Lila Cockrell Theatre of the Henry B. Gonzalez Convention Center in downtown San Antonio. The trip will also offer opportunities to attend clinics and network with fellow music students and educators from across the state.

“I never in a million years think that I could have been a two-time all-stater,” he said.

“There was a lot of competition and a lot of pressure this past weekend,” Hathaway said. “But I just told myself to focus on myself and focus on my performance and we got it done.”

He knew just because he made ATSSB All-State once before that was no guarantee for a repeat. Like in other types of competition, from football and basketball to UIL contests, he said the competition is usually getting better too.

“Definitely, don’t under estimate you opponents,” Hathaway said. If asked to offer other aspiring student musicians advice, he would encourage them to set goals and stay positive.

“You can get bad news, but you don’t have to live with that forever,” he said.

Hathaway said his faith and belief in God has helped him through tough times.

“He has comforted me through a lot and He’s brought paths I never thought imaginable,” he said. “Sometimes in life we just get so jumbled up in things that having God is really comforting.”

He also wanted to pass along appreciation to his parents, Cary and Karla Hathaway, and his family.

“I also want to thank my friends for being by my side when I needed them,” Hathaway said. He also wanted to thank all of the band directors and instructors who have helped him along the way